This weekend the Austin Animal Center is trying to find forever homes for more than 200 felines. There are currently around 800 cats in the Center’s care, with approximately 250 ready for adoption (the remainder are either under medical care or are in foster homes). Because they’re basically overflowing with cats, the Center has waived adoption fees until July 4, which means they’re giving away free kitties!!!! 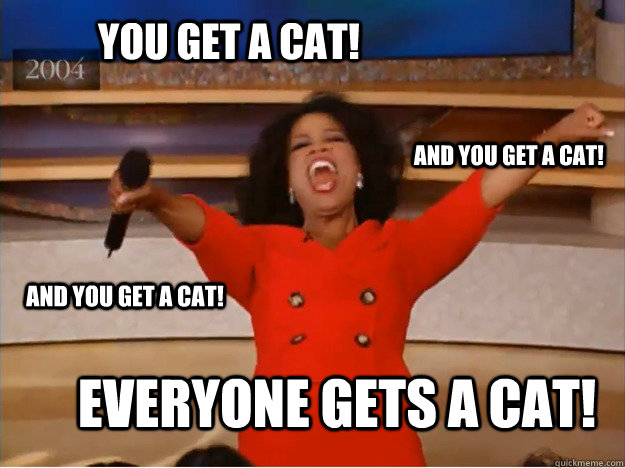 Just head down to the Austin Animal Center at 7201 Levander Loop this weekend, and find your new friend. Not ready to bring home a new companion, just yet? You can still make a difference in the lives of animals by volunteering or donating!

The joys of cat parenthood are basically never-ending, so we thought we’d wrangle a few of our favorite kitteh memes to get you all set for your journey into the land of furballs. Enjoy!

When you’re cleaning up hairballs at 3 a.m. just remember, it could be worse — you could be a dog person. 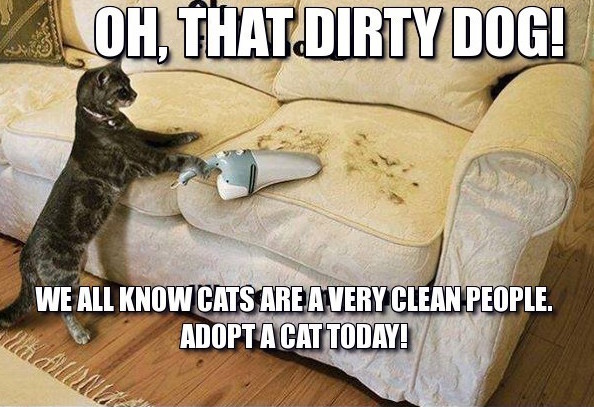 Sure, having a pet can get pretty pricey, but with a little extra training you can have them paying their own way. 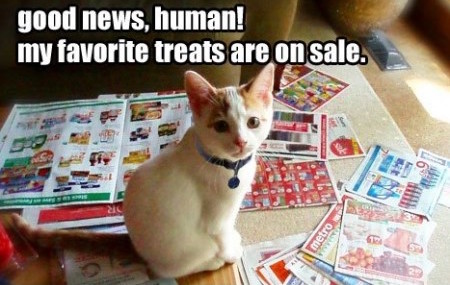 Hell, they even make their own toys. Even better! 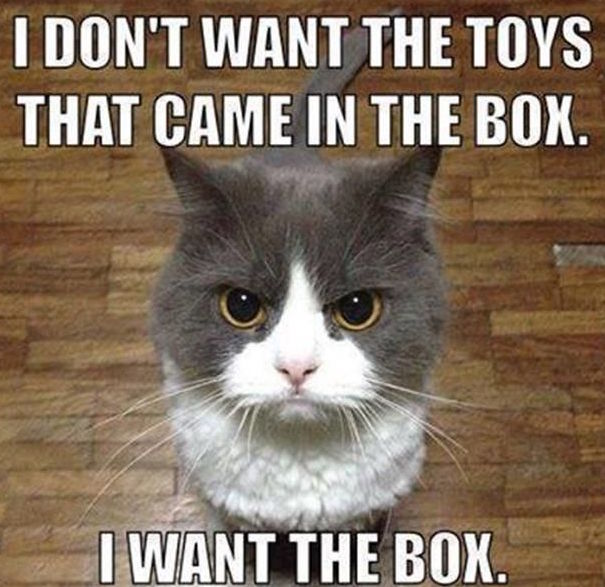 Plus, where else could you possibly find such wonderful gestures of affection? 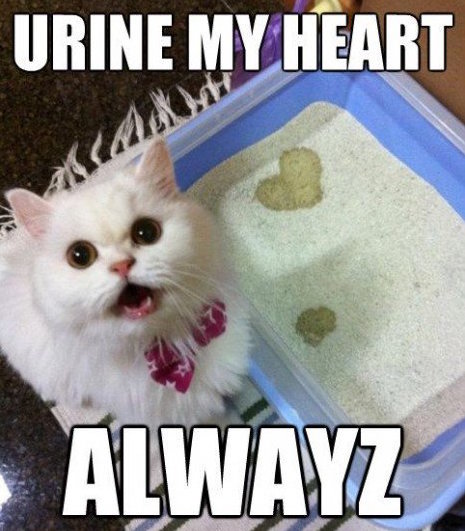 Who else can provide hours and hours of useless entertainment like a cat? 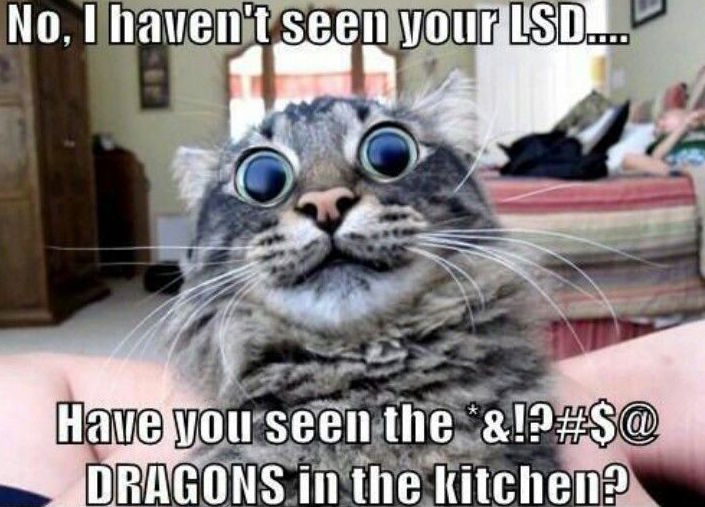 They’ll totally get into the same pop culture stuff that you love, just to spend more time with you. 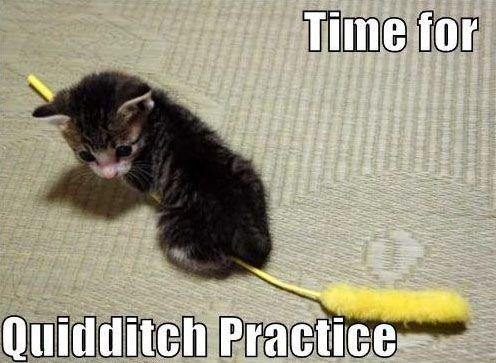 They’ll sing all of your favorite songs. Or just the ones that will annoy you to death and get stuck in your head. 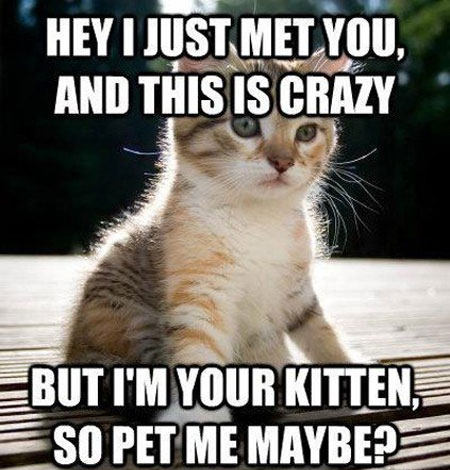 They’ll help you figure out your life goals and how to best achieve them. 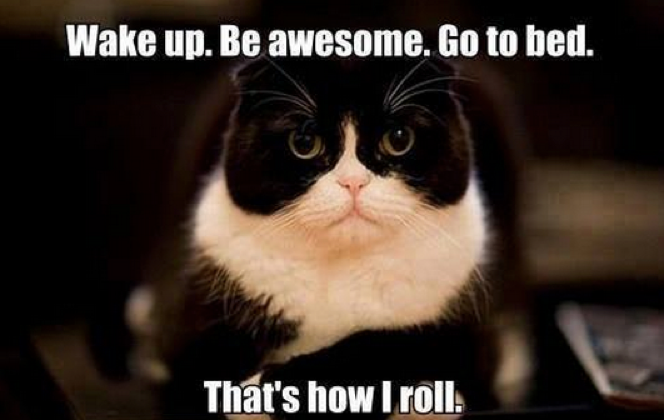 And on those days when getting out of bed just isn’t an option, they’ll be there with you, giving you cuddles and throwing the rest of the world shade alongside you. 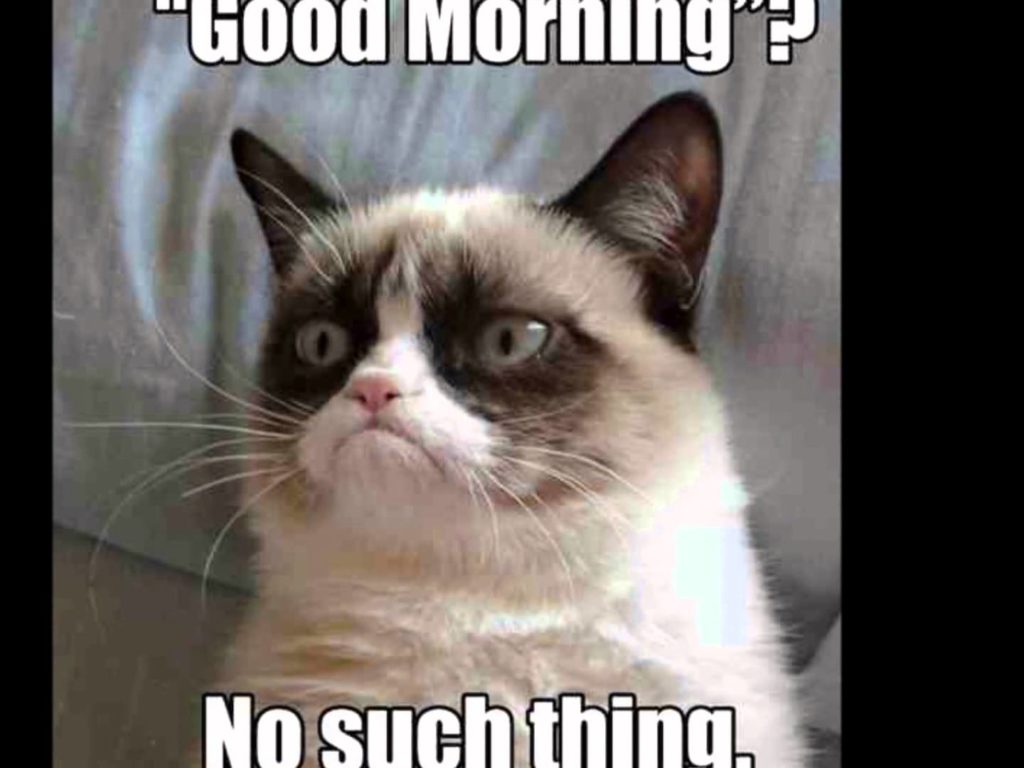 They’ll be there to make you laugh (and possibly even Internet famous). Just take good care of them. 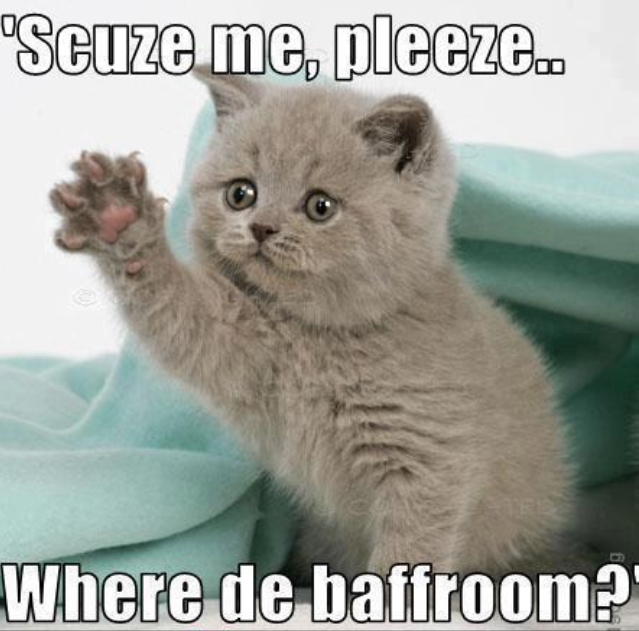 And they’ll do the same for you. 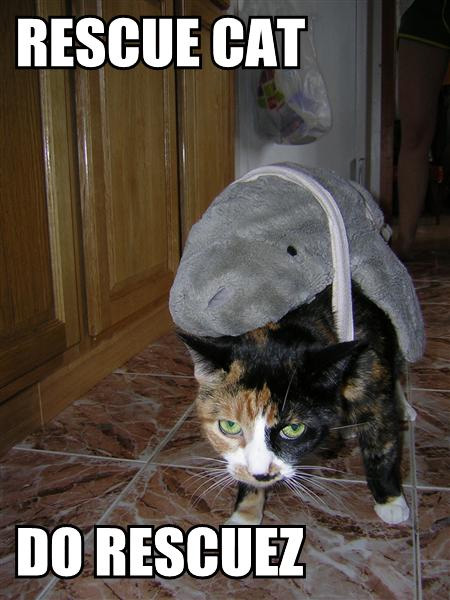 Give them lots of love… 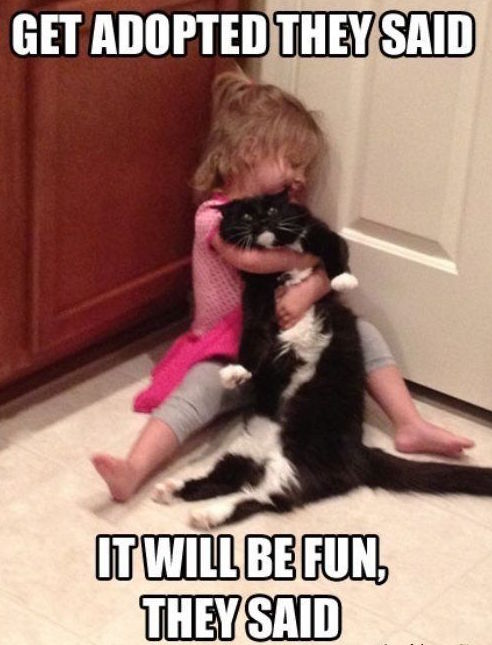 And they’ll give you plenty in return… 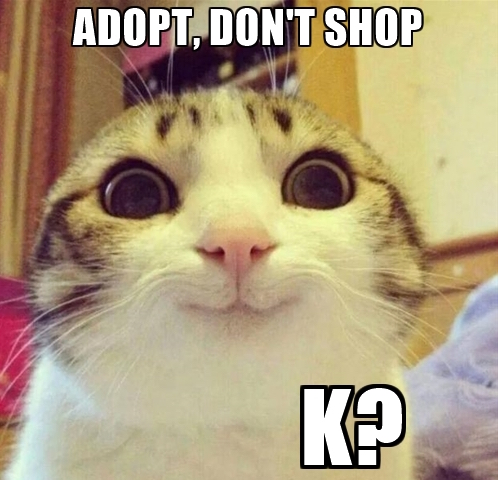 Yesterday the Austin Fire Department dealt with a somewhat unusual situation with results that probably shouldn’t surprise any Austinite. After sustaining an injury in an auto accident, a man’s dog ran away from the scene, and like any proper dog-loving Austinite, the man quickly followed.

Here’s how it all went down, as relayed on the AFD Facebook page:

Yesterday afternoon, Engine 1 and Engine 6 on the B shift were sent to a collision at Barton Springs and Riverside. As they arrive, our crews are told that the driver of the truck involved, and who was injured, had left the scene in pursuit of his dog who escaped the truck and left at a high rate of speed. Another bystander then tells Engine 1 that the owner/patient is now a couple blocks away, and the dog has been hit by a car with some pretty serious-sounding injuries.

Engine 1 finds both in a parking lot–the dog suffering some rather messy head/face lacerations, and the owner, although needing care and evaluation, being uncooperative since his attention was focused on the dog. Engine 1 was able to gain the owner’s trust by assuring him that they would look after the dog so he could be transported.

Our crews dressed the dog’s wounds, located a nearby emergency vet clinic, and transported the dog in the engine the several blocks there. The owner was contacted by our crew, who told him where the animal would be, as well as his condition, made sure all parties were okay with the arrangement, and passed the owner’s information on to the vet’s office.

We’re happy to report that the dog and his owner are both expected to make full recoveries. Just another example of the kind of commitment and dedication to service you see every day from the awesome men and women of the Austin Fire Department!

In Austin, this scenario probably isn’t all that strange considering how much we love our dogs. Many of us wouldn’t hesitate for a second to run after a hurt fur baby, consequences be damned. Many of the commenters relayed that they would react exactly as this man had, saying that their pet’s health and safety would come first.

The post drew plenty of praise for AFD from Facebook fans, and there appeared to be no criticism of anyone involved — dog rescue stories will do that. Either that or all the trolls are hanging out under the Reddit bridge today.

Commenters called AFD heroes and rock stars, and more than one person said that it was this type of love, kindness, and compassion that makes people want to move to Austin.

It wasn’t just AFD who showed big hearts yesterday. Commenter Anna Madrigal saw the whole thing go down and mentioned that she, as well as quite a few other good samaritans, stopped to help the dog. In her comment she says:

PAWS UP TO SEVERAL CARS AND GOOD SAMARITANS WHO STOPPED TO HELP THIS DOG! There were at least 10 ppl already gathered where the dog had been hit.Someone was holding on to his leash, comforting him and keeping him from running off again, while another was trying to stop the bleeding. I saw the owner RUN across the parking lots and streets to get to his dog. Several were already discussing where the nearest vet was right as the Austin Fire Department came to the rescue. Great news.

Nice work all around, Austin. Paws up, indeed.

3 Terrifying Local Critters You Might Actually Want In Your Home

Our friends at Critter Ridder lined up some of Austin’s frightening creatures who actually provide some benefits to homeowners. Did you know these scary animals can sometimes help more than they can hurt?

The Mexican Free-Tailed Bat is the creature we so proudly house under the Congress Avenue bridge. Up close, they might have frightening faces, but these honorary Austinites are friendly and helpful.

Summertime is their prime season here in Austin, and they’ve got a diet that consists mostly of mosquitoes and other bothersome insects. That means that for every bat in Austin, there are fewer bloodsucking bugs to ruin our fun outdoors.

The largest concern with bat-to-human contact is the potential of rabies spreading. However, even if a bat is infected with rabies, one of the earliest symptoms is paralysis. This would prevent the bat from attacking you directly. That said, if you find a bat which is lying still, it is probably best to leave it alone, or call an expert to remove it instead of trying to save it yourself.

They’re also a great boost to our tourism economy. Bat Conservation International estimates that over 100,000 visitors come to Austin to see the Congress Avenue bridge bats every year! This brings in somewhere around $10 million annually – a huge number for such little animals.

Austin is home to a great number of snake species. Though there are a few species you should definitely avoid, the Texas Rat Snake is actually a somewhat harmless creature.

As opposed to Rattlesnakes, Copperheads, and Coral snakes, the Rat Snake is not venomous. As its name suggests, its diet mostly consists of rats and other small rodents. It is possible for the Rat Snake to bite humans and pets, but must typically be provoked before deciding to attack.

Rat Snakes play a large part in keeping the annoying rodent population low. In fact, due to their diet and habits, the Texas Rat Snake might be more of a pest controller than a pest!

Spiders might be the most universally feared creature in the United States. Austin’s warm climate provides a good environment for several spider species, including large tarantulas. But most tarantulas, including the Palomino Blonde, are docile, slow-moving, and non-threatening to humans.

This tarantula’s diet is mostly insects that are troublesome to humans, including flies, crickets, and mosquitoes. Try not to kill tarantulas if you can – they might keep your house free of other, more annoying insects!

You may have heard about the dangers of tarantula bites. Tarantula venom is designed mostly for use in digestion, similar to human stomach fluids. So, while a tarantula could potentially bite you if provoked, the bite would not kill, even if venom is injected.

Not all Austin wildlife is dangerous, no matter how scary it may appear! Of course, we understand if you don’t actually want these scary-looking critters in your home. That’s why we recommend that any pests in your home or yard are removed in a humane manner.

All images were resized for web use, and cropped so as not to remove any significant content.

Hammy the pig made a big splash on social media this morning as Austin rallied to try to find the piggie’s parent. Hammy was seen wandering around S. 1st this morning and was picked up by animal control officers. The Austin Animal Center made a post about the pig around 11:30 a.m., and within four hours it has been shared nearly 800 times, with over 1,000 reactions.

Thankfully, Hammy has now made it back into the loving arms of his pops, Gregory Alton. Officer Chapa of Austin/Travis County Animal Protection helped facilitate the reunion, along with the good people of the Austin Lost and Found Pets Page on Facebook. As the AAC page says, the pig was spooked in the storms and ran away.

Thanks to the incident, it seems as though Hammy might have some new friends and a play date soon. A Facebook commenter added: “I’m right in your hood too and I got a pot belly, maybe Hammy and Sir Porkington Chops-A-Lot should have a play date.”

Pets running away from home during storms is a very common occurrence, one that lands pets at the doors of Austin’s shelters. If you find yourself with a missing pet (though it’s unlikely yours will make quite the splash that Hammy did), be sure to visit the Austin Animal Center’s Lost & Found page as soon as possible.

If you’re looking for a pig pet of your very own, first do your research and make sure your home and your life are appropriate for a pig, then check out a local rescue organization like Ma’s Mini Pigs’ Farm and Rescue in Kyle or through the Rescue Me! Texas Farm Animal Rescue site.
——

is a non-profit community service based organization dedicated to reuniting missing pets with their families in and around the Austin area.